And we're here!  After hours and hours of travel we have all finally arrived!  Gees it's a long way from Oz to France!  We're all okay despite suffering from various degrees of jet lag and consequently insomnia.  We're all staying together at a nice hotel in the center of Divonne called Park Suites and appear to be communicating well enough to be understood.  Rehearsals have begun and it all now seems very real.  We haven't seen inside the actual space yet but have stood outside and it looks huge!!  We've had a trip to the supermarket, eaten some French sushi (!) been for a walk around the lake, nodded and smiled at locals and got stuck into the duty free gin.  Some things remain the same wherever you are.  The bells of the church across the road chime on the hour and are keeping us on track.  More soon. 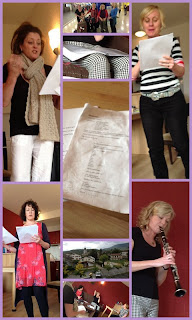 After 18 months of planning, talking, writing, editing, choosing music and songs and even some rehearsal, today we leave for France.  Over the next ten days I hope to blog regularly about our journey.

‘We’ is ensemble loin d’ici – four Melbourne artists  (myself, Sian Prior, Margot Knight and Lisa Male-Robertson) who have come together specifically to create the new work Ici, which will be staged at the Australia Festival in Divonne-les-Bains in France.  We will perform in both English and French. 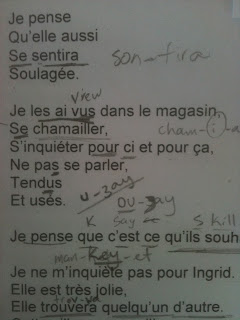 The Australia Festival is the brain child of Australian ex-pat Bronwyn Lay who lives in Vesancy, France, close to the Swiss border.  Bronwyn and her partner Nico Clark and their four children moved to Vesancy about six years ago.  Nico works for WHO in Geneva and Bron is a lawyer, writer and PhD student.  In 2010 Bronwyn launched the inaugural Australia Festival, which she is now establishing as a biennial Australian cultural festival.

In 2011 Bron invited me to develop a piece of work to bring to the the 2012 festival.  Initially I laughed at her suggestion and thought there would be no way that I could get a piece of work together, along with a cast, and get ourselves over to France.  But one morning I work up and thought 'why not?' and so started the process of developing a new work to take to France.  At the time I was working for philanthropist and artist David Bardas (DB) on the Home For Lunch project.  I knew that DB was a Francophile so began discussions with him as to how I could develop a work to take to France.  DB encouraged me to submit an application to his foundation, the Bardas Foundation, and I was extremely fortunate to the receive funding to enable me to undertake the project.

I began writing Ici in October 2011.  My aim was to develop three monologues that worked as independent pieces but also sat together as a triptych.  I have been interested in monologue work for a number of years and have had some modest success with my piece Bits and Pieces (based on the central story of a woman who leaves her child).

I knew that I wanted to write about the ideas of place and belonging and how one forms an identity with place.  Even before I started writing I knew I wanted to call the work Ici - which means 'here' in French.  It probably seems a bit pretensions to give an English work a French name - but as  I was developing the work in the first instance as a piece for France I felt I could give myself that little indulgence!  I have had an ongoing interest in both my community arts work and theatre work in this subject.

Initially I had three ideas for three separate stories.  The first story, which was told to me many years ago by my friend Margot Knight, was based on a true story told to her in a small country town when she was touring my play If I  Should Die Before I Wake.  She was chatting to an audience member after a show one night and the person told her a story about a bank teller who had been sacked from her job due to a breach in confidentiality.  The bank teller had observed, for months, that one of her regular customers was constantly withdrawing large sums of money.  On numerous occasions she would bump into her at the 'club' where she would be playing the pokies.  The bank teller realised that this customer was slowly draining her bank account in order to feed her addiction and no-one in the family knew.  She took it upon herself to inform a family member.  In the banking industry this is a breach of the code of ethics and she was sacked.  She was deeply saddened by her dismal as she felt that what she was doing was trying to save a community member not humiliate them.  From this story I developed the monologue The Bank. The Bank is performed by Lisa Male-Robertson.  I have been friends with and worked with Lisa for many years.  We worked together on numerous projects when we both lived in Daylesford.  Lisa loves all things French and spent time in Paris a number of years ago working with a small French company.  She was the first person I spoke to about my idea for the project and has been a constant encourager of the work throughout its development.  Lisa is funny and sassy and great company and I am looking forward to traveling with her and working with her in France. 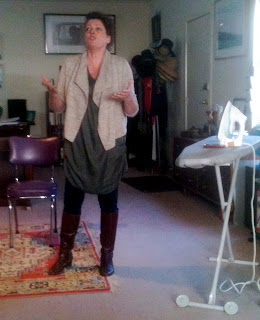 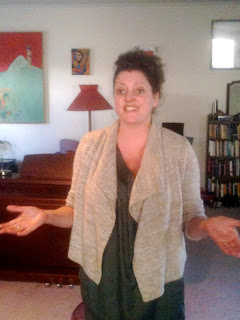 The second story was inspired by a story my friend Jude told me which had at it's core the subject matter of erotomania. I was vaguely aware of erotomania when I read the wonderful book Enduring Love by Ian McEwan many years ago.  I had further discussions about erotomania with my psychologist friend Bruce who told me that often at the core of this mental health disorder is extreme loneliness.  Actions and conversation are frequently misread and signs which don't really exist are often construed.  This lead me to write the second monologue Sausages about a lonely woman who thinks her local butcher is communicating his love for her via his daily meat displays. I perform Sausages. 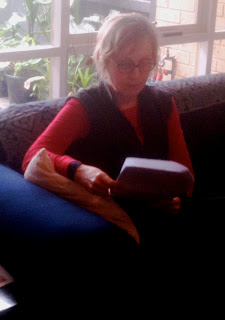 The third monologue is called My son, his father and me. This monologue was inspired by a variety of stories and things I have observed while living in rural and regional Australia.  I grew up in Mt Isa in north west Queensland and spent about 10 years living in Daylesford.  The story is told through the eyes of a mother, while she sits in the church of a young man's funeral.  The young man is her son's best friend and he has taken his own life.  At the core of the story is the isolation that young people can feel when they are gay and living in a small country town.  Margot Knight performs this monologue.  I started working with Margot about ten years ago.  She is an outstanding actor, an extremely professional theatre producer and a firm friend.  I am delighted to be working with her on this project as she bring huge professionalism and attention to detail to all her work and she wears great outfits and shoes!  To top it off Margot is fluent in French and is currently finishing her French teaching degree at Melbourne University. 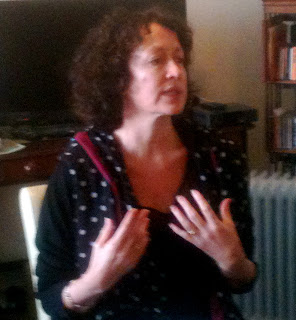 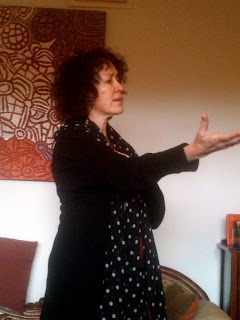 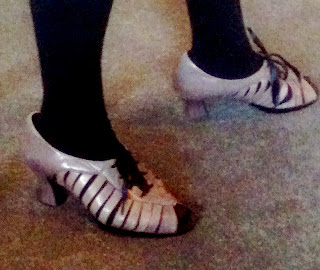 After developing the first draft of the work I then had the wonderful opportunity of working with playwright and dramaturge Peta Murray.  I have been aware of Peta's work for many years (she awarded me a prize for my monologue Left many years ago at the Glen Eira writers awards) and more recently my friend and colleague Mari Lourey had worked with her.  Mari encouraged me to make contact with Peta and I did and she came on board with the project as dramaturge.  Peta assisted me with linking and shaping the three monologues into a nested triptych.  During my work with Peta I decided to set Ici in an inland isolated mining town and used Mt Isa as my reference point.  I am indebted to the work and support of Peta - the project would not be what it is without her amazing insight.

Getting the opportunity to work with writer, musician and broadcaster Sian Prior was the absolute icing on the cake.  Sian is a friend and has been very encouraging and supportive of my work for many years.  On top of that she is a wonderfully talented musician and speaks fluent French so was an absolute natural choice for the project.  For Ici Sian plays clarinet and sings French art songs. 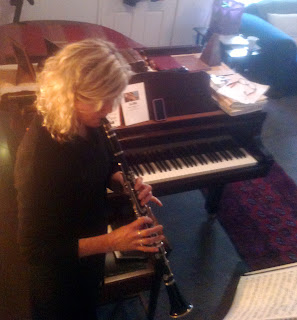 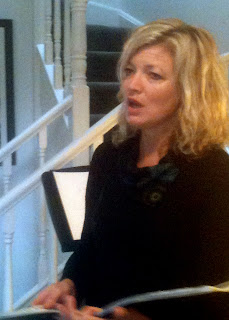 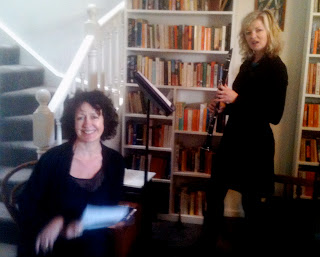 In May of this year we did a rehearsed reading of the work at the Williamstown Literary Festival and it was great to get an audience response, feedback and critique of the work.  Since that time I have done some major editing on one of the monologues (The Bank) and some tweaking of the other two pieces.  Earlier this year we engaged translator Marc Orlando to translate our work and he developed three very beautiful French pieces for us.  We feel very lucky to have had Marc working with us and he has been extremely patient and generous with his time.

The French aspect of the work has been the most difficult for me and Lisa as we are not fluent in French and are operating very much on very basic high school French.  There have been moments when I have thought that I was completely insane for embarking on such a difficult and huge project - but with the intensive support of many people have been able to reproduce something that is very passable (I hope) in French.  (I wish my French teacher from Mt Isa State High could see me now!!!) Both Margot and Sian are fluent so their assistance has been essential and generously given - without it Lisa and I would be drowning!  We've also had amazing support from Sophie Duterte, Carol Pondevie-Lay and Julien Nicole and of course partners, children, families and friends.

And so, in about 4 hours we head to the airport to board that big plane to Geneva.  We will hang out in Dubai (hopefully with some much needed sunshine) for 48 hours and then arrive in Geneva on Monday.  In Geneva I will link up with my daughter Georgina, friends Donna O'Mara and Marlene de Wilde and my nephew Dan Kelly.  I'm looking forward to a great week in Divonne.  I hope you'll follow this blog for updates of our adventure.

Posted by Rebecca Lister at 11:09 am No comments: